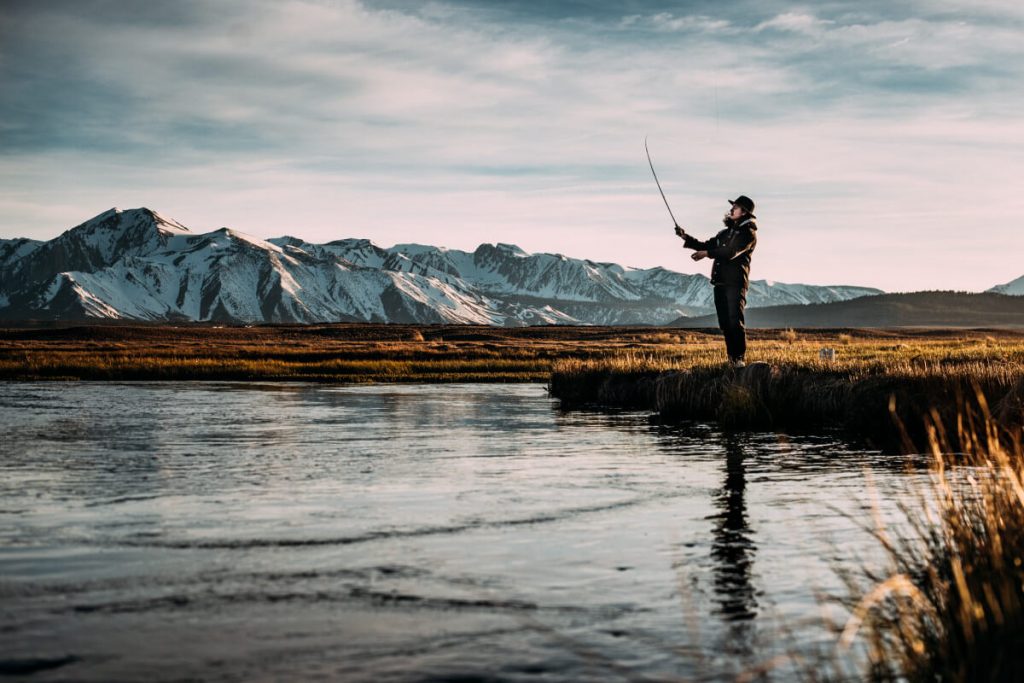 Fly Fishing vs. Spin Fishing – What’s All the Fuss About?

As it happens, the debate isn’t quite as complicated as it can first appear.

In fact, once you’ve taken in a couple of the key points about each side of the argument, slicing your way through all the white noise to the heart of the matter is remarkably simple.

Which is not to say that there’s a right answer: as we all know, every angler is different.

However, by the end of this article, hopefully, you’ll be armed with the information required to make your own, informed decision about which technique is best for you.

With that out of the way, it’s nuts and bolts time. What on earth is the difference between fly-fishing and traditional, spin-fishing, anyway?

Let’s start simply. Fly fishing is defined by using a ‘fly’ – a light-weight, artificial piece of bait – to entice fish out of their slumber and onto your line.

The key concept to take in is the fact that the lure is light.

Unlike traditional fishing, the aim of the game here is to float the fly on top of the water, more accurately simulating how real flies act.

Spin-fishing, on the other hand, involves what’s known in the industry as a spinning lure.

It’s not just the lure, though: rods and reels also come into play in distinguishing between fly and spin fishing.

To cut a long story short, a spinning rod either involves an open or closed-face reel, and doesn’t have a trigger attached to its base, unlike the conventional alternatives.

Flies can be delicate, and are often beautifully crafted. There’s a distinction to be drawn here between attractive and imitative flies.

While imitative flies attempt to mimic real-life flies as close as possible, their attractive counterparts endeavor instead to appeal to the fish’s primary instincts by creating a range of different effects that don’t necessarily happen with flies in the wild.

Why is this worth mentioning?

Because spinners, as they’re known by those in the know, attempt to imitate fish, as opposed to attractive. Although they (clearly) don’t resemble fish at all, one reason that they work is that fish have poor stationary eyesight, while they’re much more sensitive to movement.

The spinner creates a small amount of turbulence around it as it sinks down, which can often be enough to entice a pike to bite.

Casting: It’s Not Quite Magic, But It’s Not Far Off

With fly-fishing, of course, the fact that the lure is so light means that different casting techniques are required. By the way, in researching this article I had to make a few forays into Google to make sure I had my information right.

Let’s describe the two main fly-fishing casting techniques and go from there.

Firstly, we have the classic method. The best way to visualize how this technique works is by imagining that instead of casting the lure itself, you’re focused on casting the line.

It’s a subtle distinction, but one that makes a world of difference.

As opposed to spin-fishing, when you can count on the lure to provide enough weight to judge the momentum of the cast accurately, when you’re casting the line there are many more factors you need to take into account.

Even within the classic technique of casting the line, the savvy angler needs to decide between a few different ways of going about his business.

He can opt for a so-called ‘forward cast,’ which primarily involves using the forearm to ensure the line is straight when the snap occurs (hint: by snap, I mean the moment at which energy is transferred from the coiled rod to the line itself).

Other options available include:

Compare this with spin fishing, which requires the angler to be casting upstream in order to ensure that the spinning lure sinks deeper, quicker.

Although the spin fishing school of thought as a whole is limited some by this requirement, fishermen have nevertheless managed to devise two main techniques for casting with spinners.

The first of these is known colloquially as ‘Walking the Dog’ (I found this to be a very helpful video while I was trying to learn what, specifically, Walking the Dog looked like).

The basic concept is straightforward enough. Right before and right after each jerk of the line, the fisherman must ensure there’s some slack on his line.

This is to ensure that the movement of the lure is as natural as possible; and while it takes some practice, there’s no reason to think it’s beyond anybody’s reach.

If you’re not keen on Walking the Dog, think about bottom bouncing. The idea here is to launch the spinner way upstream, and then let it ‘bounce’ back along the riverbed towards the fisherman.

Owing to the speed required on the line to make this technique look natural, it’s most often practiced from some kind of vessel: a dinghy, slow-moving boat, or a raft are all good options.

So where does that leave us?

We’ve seen the fundamental differences between fly fishing and spin fishing, and we’ve had a look at the casting techniques.

Let’s move on to the heart of the situation: which fish can be caught using which technique?

Who and What to Aim At

While spin fishing can, in theory, attract most species of fish, it’s most commonly practiced with freshwater targets.

Depending on where you are in the world, this hit-list of sorts could include perch, salmon, Bream, Bass, trout, and even pike, to name but a few.

In Ireland, for example, salmon are popular fish to try to catch using spinning techniques; whereas, in Utah, U.S.A., bass are a much better option.

Fly fishing enables the angler to go for a wide range of options. From cold water fishing to nymphing for trout – from still water trout fishing to salt-water fly-fishing – the possibilities aren’t quite endless, but there are more than enough of them to keep you busy.

It should be noted that water depth also plays a part in which fly-fishing technique to employ, as well as the size and strength of the fish you’re going for.

After all, a healthy marlin is always going to prove a more problematic opponent than an under-sized bonefish.

As ever, knowledge is power. When it comes to target species, I’d recommend reading up about your area, as well as the seasons: there’s no point charging mindlessly after chub when there aren’t any around.

At the start of the article I promised (or threatened) that there wasn’t going to be any hard-and-fast, sure-fire answer.

Sure enough, there isn’t.

Fly-fishing and spin-fishing are two drastically different angling schools of thought, and deciding which one is right for you is a personal job nobody else can take on.

Do you have any fly-fishing or spin-fishing Pro Tips? Let us know in the comments below: the only thing more fun than fishing is learning.

Well, most of the time.

Swimbaitzone.com is a participant in the Amazon.com Services LLC Associates Program. As an Amazon Associate we earn from qualifying purchases.
Amazon and the Amazon logo are trademarks of Amazon.com, Inc. or its affiliates.