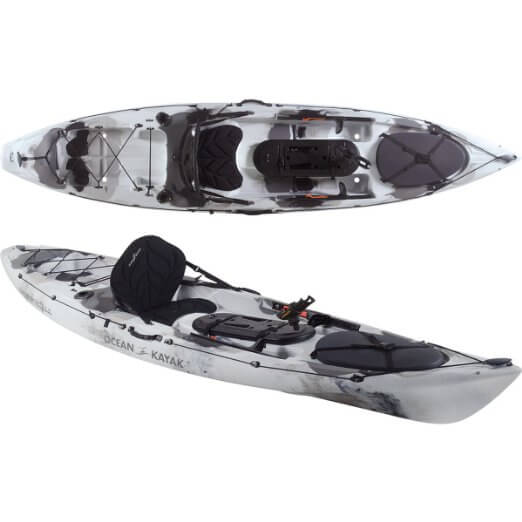 This sit-on-top model was one of the first designed specifically for fishing and it still one of the most popular choices for anglers.

We are impressed by the wide range of conditions on the water offering stability, maneuverability and speed and how it can cope with breaking surf and rough seas.

This kayak will not break any speeds, but it certainly goes a lot faster than a lot of other kayaks that offer this level of stability.

What to Consider when Buying a Fishing Kayak

Shopping for a kayak starts with understanding the key considerations that every angler should consider. You will undoubtedly spend a great deal of money which is fine if you get a kayak that is suited to your personal needs. Consider the following main concerns before you begin your hunt for the perfect fishing kayak:

This great sit-on-top kayak offers great drainage and ventilation, so it is perfect for a day of fishing.

There is a comfortable seat that allows for good access and the material is very durable. The stern tank well has a bungee which will accommodate a large dry bag full of gear, a cooler, or the fish that didn’t get away.

The Ocean Kayak Trident has an overall capacity of 400 pounds and is great for anglers on the smaller end of the scales or who do not take a lot of equipment on their fishing trips. If you are used to going on long expeditions and taking a lot of equipment then the capacity may be an issue for you.

For us, the balance between stability and maneuverability is really good considering the length of this kayak, but is less maneuverable than many other kayaks, if this is what you are after.

Coming in at 56 pounds it is relatively light compared to some other fishing kayaks and those who are not very strong will love the fact that it can be moved by one person.

Ocean has done a great job at designing a kayak that offers good stability and ability to maneuver whilst still remaining relatively fast. They have managed to do this by getting the combination of length and beam size right on point.

The speed is not phenomenal by any standard, but it does reach higher speeds than an average 11 and a half foot kayak. Sporty types may still not like this kayak, but those who are thinking of moving on to a faster kayak but do not want to take too much of a risk will love it.

The team has done really well at achieving a relatively lightweight kayak, that at 56 pounds is reasonably easy to transport. You may need a little bit of help getting the kayak on top of your car, but other than that it should be fine to launch on your own.

The overall design of the Trident means that the kayak runs very smoothly and it takes very little effort to paddle, meaning that you have lots of energy to fish.

We have to say the back support was far superior to that we have seen on some models within this price range. The cushioning on the seat is some of best we have tried and you will be forgiven for taking a power nap in between catches, it is that comfortable.

As we have said, this kayak is not all about what it looks and feels like, it has many innovative features, such as foot braces that you can adjust and adjustable seating.

These features may seem trivial but when you think of the varying sizes of anglers, you can think about how a few inches of extra room can be beneficial. Larger anglers often go for Wilderness kayaks due to this extra room and it is one of the main reasons people choose the Trident model. If there is room to stand up and get as close to the fishing action as possible, it is a massive tick in the box from us.

As we mentioned in the intro, the center console is placed in such a way that it does not protrude, the way some consoles can, so it gives great space in front of the seating area. It is the little things like this that make a big difference to anglers, especially if you are going to be out in the water all day and need to feel as free as possible.

The fact that the designers of this kayak have managed to create such a great kayak is fantastic and we are sure that it would sway experienced kayakers to compromise on speed.

The stability and maneuverability make this kayak great for fishing in lakes and rivers, as well as other calmer water where you have to get around a lot of greenery and debris.

We have talked enough about the appearance and speed of the Trident, now we want to get to the nitty-gritty of what other features makes this kayak stand out from other fishing kayaks.

The Trident 11 kayak features a modular fishing pod console that is a very welcome place to put your electronics and is designed in such a way that it does not obstruct the standing room.

Rods and equipment are easy to access and the hill is transducer friendly. There is also a large hatch in the bow for dry storage, although we have to say that the amount of space is on the lean side.

There will be enough room for your bait buckets and coolers, but there is not a lot of outfitting other than that. There is the opportunity to customize if you wish.

The Trident’s stability is due to the pontoon-type hull design, which is becoming popular in the new generation of stand-up kayaks. The Trident is definitely not flimsy!

The weight of the kayak is pretty average and while you may need help getting the kayak onto the rod of your car, it should be easy to launch and move about small distances without the help of a friend. If you are not very strong and cannot always get help, then a trailer is a consideration.

A lot of the features of this kayak are great, some very unique even, so we think that it would be a wise investment for anglers who are ready to upgrade the speed of their kayak without losing any of the stability and maneuverability.

We are sure that we would go ahead and buy this kayak, with the only small qualms being the lack of outfitting and the lack of anchor trolley, which can easily be rectified with a bit of smart thinking.

There is enough room in the cockpit for you to make adjustments to make it more comfortable for you. If you want a very fast kayak then the Trident is not for you, but if you want a good mix of speed and stability then it will be spot on.

Critics have said that this kayak is a little old fashioned, without as many modern features as some kayaks of the same price, but there is nothing wrong with liking classic features, in our opinion.

Whilst this isn’t a kayak we would shout out about, we do think that it is a great kayak for those who like an easy to maneuver and stable kayak, rather than one that will build up a good speed.

Swimbaitzone.com is a participant in the Amazon.com Services LLC Associates Program. As an Amazon Associate we earn from qualifying purchases.
Amazon and the Amazon logo are trademarks of Amazon.com, Inc. or its affiliates.